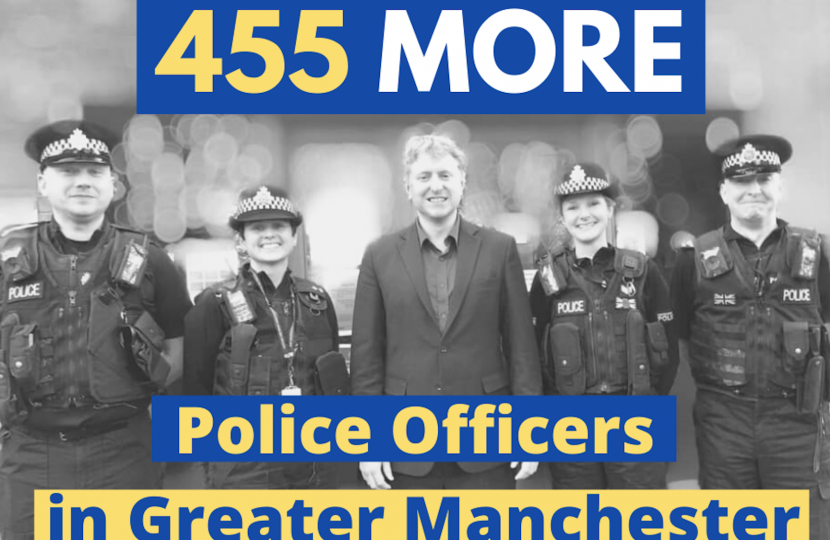 Mark Logan MP has hailed the announcement that 455 police officers have been recruited in Greater Manchester since September 2019, bringing the total number of officers up to 7,242. The latest figures are part of the Conservative Government’s drive to get 20,000 more police officers on the street by 2023.

The MP for Bolton North East has been vocal in his calls for safer streets across the borough. In a recent crime survey sent to over 4,000 people, Mark Logan MP asked residents about crime and anti-social behaviour in their neighbourhood. Later relaying the critical issues directly to the new Chief Superintendent in Bolton.

The MP has also requested a crime forum for residents with local police teams later this year.

“From my recent crime and antisocial behaviour survey sent to over 4,000 Boltonians, there was a clear demand for an increased police presence.

This news is a real win for our community. These officers – alongside the new Crime Beating Plan – shows how I and the Conservative Government are delivering on the people’s priorities to keep our communities safe here in Bolton North East.

It’s also hugely important that residents and police can build a good relationship with their local officers, that’s why I’m looking to host a crime and policing forum for the residents of Bolton North East later this year.”

The recruitment drive is also helping to make police more representative of the communities they serve. There are more black, Asian and other ethnic minorities employed as officers across forces than at any other time in the country’s history, making up over one in ten of the new recruits.

The plan includes ensuring each neighbourhood has named, contactable police officers, who know their area and are best placed to ensure that persistent crime and anti-social behaviour is tackled - a pledge made more possible by the increase in police numbers.

This builds on the action taken by the Conservative Government since Boris Johnson became Prime Minister two years ago – including boosting police funding to a record £15.8 billion, passing the Police Crime Sentencing and Courts Bill through the House of Commons, and delivering £45 million through the Safer Streets Fund to make neighbourhoods secure.