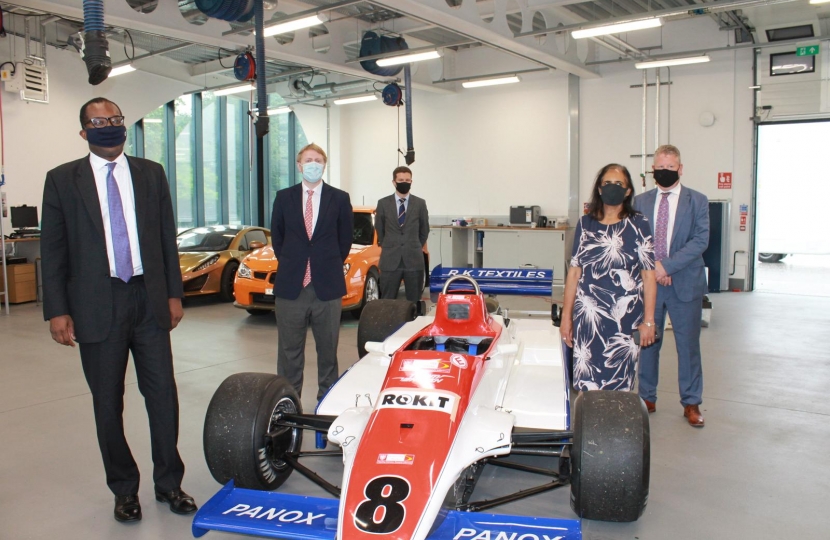 This year the Government announced its plans to cement the UK’s place as a science and technology superpower through the creation of the new research funding body, the Advanced Research Invention Agency (ARIA).

The research body is tipped to be the UK’s most ground-breaking invention centre to propel the nation into being a global science superpower.

Mark Logan MP hosted the Secretary of State for Business, Energy and Industrial Strategy, Kwasi Kwarteng on the Minister’s first official visit to Bolton since acceding to the role in early 2021.

The visit comes just days after the announcement of the new UK-wide Innovation Strategy.

Mark Logan MP for Bolton North East was keen to show the Secretary of State Bolton’s strong case to house ARIA with an immersive tour of Bolton’s past, present and future in invention and innovation.

Mr Kwarteng savoured the Samuel Crompton exhibition at the Bolton Museum, showcasing how invention resides in Bolton’s DNA, whilst laterally appreciating the Wellsprings Innovation Hub, a central cog in the town’s regeneration plans and levelling up agenda.

The University of Bolton’s National Centre for Motorsport Engineering (NCME) rounded off the visit with a bang.

The Secretary of State gave students a ministerial send-off as they departed to the world-famous Silverstone race track, where this weekend professional driver Michael Lyons will race a classic F1 car which they are working on as part of the pioneering ‘Fast Track to F1’ project at the University.

Deputy Leader of the Council, Martyn Cox and Councillor Hilary Fairclough greeted the Secretary of State on his arrival to Bolton, and the delegation was shown around Bolton Museum by Sam Elliot.

“The foundations of Britain’s reinvention were laid in Bolton over 200 years ago.

“We are ready for ARIA to be part of our great town and country’s next reinvention.

“Invention and innovation is everywhere, and the Secretary of State got to see that with his own eyes today.”

“We were delighted to host the Secretary of State on his visit to Bolton today.

“Nowhere is the UK’s thriving innovation scene more apparent than here at the University of Bolton – this can be seen in the work our students and companies locally are involved with at our excellent National Centre for Motorsport Engineering.

“We were delighted to talk to the Secretary of State about how universities such as Bolton can boost the economic prospects of the region and the town itself.

“The University of Bolton is at the heart of efforts to level-up the region through innovation and skills.”